The transformational Ayrshire Growth Deal has reached a major milestone – paving the way for the creation of thousands of jobs and the investment of millions of pounds into the region.

The signing of the £251 million deal represents a massive boost to the area, and is the culmination of four years’ work by the councils, partner organisations and both governments.

The deal will galvanise efforts to develop key strategic sites and sectors in Ayrshire. It will help leverage private sector investment of more than £300 million, with the potential of creating up to 7,000 new jobs.

A range of projects will be delivered across Ayrshire with a clear focus on innovation, productivity and inequality. The deal will create new business spaces, improve infrastructure and connectivity, and boost research and development ventures, while growing local talent and providing new opportunities and routes into employment for people throughout Ayrshire.

Construction at HALO Kilmarnock is already well underway to transform the former Johnnie Walker site into a dynamic commercial, educational and advanced training hub, with focus on sustainability and low carbon energy.

Other projects already progressing include the National Energy Research Demonstrator Project in Cumnock, which will develop leading edge technologies for energy generation and storage. At Prestwick, a major programme will strengthen its position as a UK centre of excellence in space and aerospace, while the development and regeneration of The Great Harbour, at Irvine Harbourside and Ardeer, will create a unique coastal tourist destination.

The proposals represent a tremendous opportunity to improve the well-being of communities and the economy. Signing this deal will allow partners to progress plans to support recovery and renewal post Covid-19, and transform Ayrshire into a 21st century powerhouse for growth.

“In a period of economic uncertainty and challenge, delivery of the Ayrshire Growth Deal is more important than ever with the projects re-invigorating the regional economy. I appreciate all the hard work that the three councils across Ayrshire and their partners have put in to get us to this point. The signing of this deal, with investment of £103 million from the Scottish Government, will help to drive future growth and prosperity in the region and in Scotland as a whole.

“Our investment in skills, digital infrastructure, community wealth building, tourism and regeneration will generate a host of opportunities for communities, businesses and individuals across the region. We will see jobs created and jobs protected across Ayrshire. Projects including the HALO and the Ayrshire Manufacturing Investment Corridor will cement Ayrshire as a leading area for innovation in Scotland. We will continue to work with the three Ayrshire Councils and partners to help deliver the projects that will unlock investment and drive inclusive growth across the region.”

“This is a landmark moment for Ayrshire. The deal we have agreed today will have a profound
positive impact on the region for generations to come.

“From advanced manufacturing, to clean energy, to aerospace and marine science – the UK
Government’s £103 million investment will cultivate innovative and sustainable industries that
bring quality jobs and benefit Ayrshire’s communities.

“Growth Deals are important to our long term economic recovery from COVID-19 and the UK
Government’s £1.5 billion in Growth Deal investment across Scotland is securing our future
prosperity.” 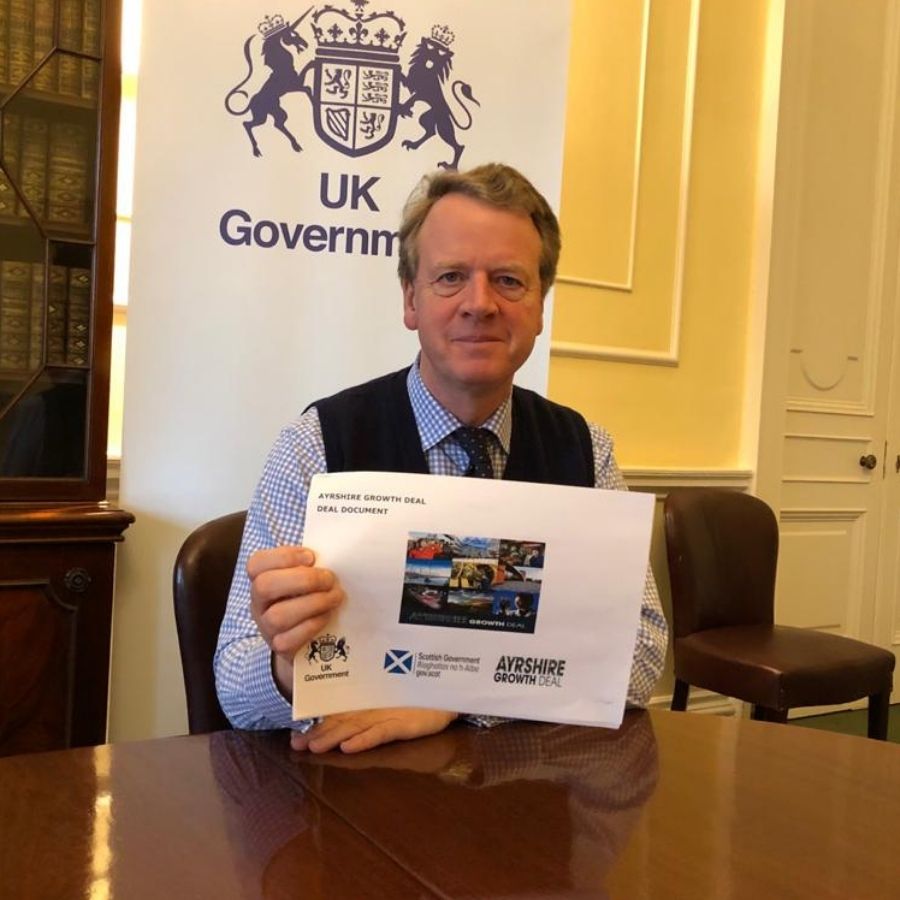 “Obviously the last few months have been uncertain for all of us. So, we are delighted that we have now formalised our Ayrshire Growth Deal plans and can look ahead to building better times for our region.

“The pandemic has shone a light on the inequalities in society and at the heart of the Ayrshire Growth Deal will be equity and inclusivity. The Growth Deal represents a £251 million Community Wealth Building opportunity, with every project delivered with a focus on sharing the benefits and rewards from the investment across our communities.

“Considerable work has been progressed in recent months to get us to this stage. Now we have reached it, we are ready to start delivering on the potential of the Growth Deal for the people of Ayrshire.”

“This is a landmark moment for Ayrshire. The deal we have agreed today will have a profound positive impact on the region for generations to come.

“From advanced manufacturing, to clean energy, to aerospace and marine science – the UK Government’s £103 million investment will cultivate innovative and sustainable industries that bring quality jobs and benefit Ayrshire’s communities.

“Growth Deals are important to our long term economic recovery from COVID-19 and the UK Government’s £1.5 billion in Growth Deal investment across Scotland is securing our future prosperity.”

“Ayrshire’s potential has been left untapped for decades, and while we know the Growth Deal will not solve all of our problems overnight, these projects will greatly assist our economic recovery and change the fortunes of Ayrshire for this, and future generations.

“We cannot overestimate the importance of the environment and green economy in our future prosperity, and I’m delighted the Ayrshire Growth Deal will be characterised by not only its positive economic impact, but also the sustainable aspirations we have for our communities.”

“This is a significant day for Ayrshire, as more than four years of dedicated partnership working comes to fruition. I’m extremely proud of the collaborative effort that has allowed us to progress to this stage.

“The last few months have been particularly challenging, and the Ayrshire Growth Deal brings with it hope of a brighter, more prosperous future for our communities.

“The deal will allow us scope to develop key strategic sites and sectors across Ayrshire, and will help to realise the area’s potential as a world-class business region.

“Our aim is to make Ayrshire a better place to live, work, and invest in, and this deal will enable us to realise these ambitions.”